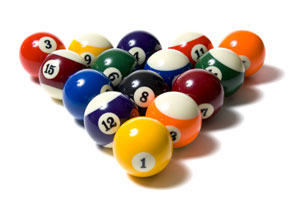 Obviously, one of the major pieces of equipment needed to play pool is the set of balls. Regulation pool balls are designed specifically for the game and coincide with the physics involved in overall play. As you read, you will learn how the balls are made, what materials are used, regulation weights and more. Pool balls are not just an ordinary orb placed on the table and much design and engineering is involved.

The earliest balls were made of wood clay. These were used for years until the use of ivory came into play. Ivory balls were short-lived. It’s heartbreaking that by the 1800’s, millions of elephants were being slaughtered to obtain the ivory used to make the balls as well as many other items. Only eight balls could be made from one elephant! Seeing this as unfit, a new material was sought after.

A composition material was then invented, called cellulose nitrate. It was later commercially branded Celluloid, also known as the first industrial plastic to be marketed. Thought to be a great invention for making the balls, the material was soon not accepted as it caused the balls to occasionally explode. This made these plastic billiard balls impractical. The invention of this material served many other useful purposes as the use of plastic became more accepted. However, as for the pool game, it was unacceptable.

Other compounds were experimented with until the perfect material had been found. Today’s regulation pool balls are cast from phenolic resin. This material is resistant to chipping and cracking and has become an industry standard. It is the only ball material used today in play by professionals. There are lower grade balls made of polyester, but use of these result in shorter ball and cloth life.

The regulation pool balls we commonly see today are made of resin and are regulated by weight and color. The standard ball has a weight of 5.5 to 6 oz. with the cue ball at a standard 6 oz. The balls are colored and grouped into solids and stripes and numbered accordingly. Custom balls are available offering an assortment of colors and markings and are often used in trick shooting to add visual appeal.