HOW TO USE BACKSPIN 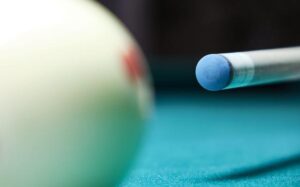 Learning backspin can be hard. Let’s start by saying any shot that is not performed by a straight on centered approach will be difficult to master, not to mention hard to control. A shot that is made by aiming at any point other than the center of the cue, will cause the cue ball to be projected with a spin on it. Using backspin on your shot causes the cue ball to draw away from the object ball and return towards you upon contact with the object ball. It’s normally done by hitting the cue ball below center. This is a difficult shot to master because hitting the cue ball below center normally creates a “miscue” specially for beginner players. Many players will “jump” the ball until they master this technique.

The distance the cue ball has to travel before impact with the object ball is a major consideration when using backspin. Another factor is the type of cloth on the table. Smoother cloths will have less friction thus allowing the cue ball more momentum to draw back as opposed to a rougher type of cloth were friction will hinder the momentum of the cue ball a lot more. Most higher priced tables are constructed with a smoother cloth, thus enabling players to apply backspin and English efficiently.

Backspin is a great tool to master when learning your techniques as a newer player. You will find this technique advantageous in many situations and it will increase your over-all game. The primary use of backspin is to avoid scratching when normally the cue would follow through on a shot. Placing backspin on the ball will allow you to make the shot and remain in control of the game. It will allow you to “set up” your next shot with a better leave than if you were to make a follow through shot. Many players apply backspin to their shots to create a good lay of the ball in preparation for their next shot.