English or Sidespin is an advanced technique in pool referring to spin that is put on the cue ball.

You can apply it in a number of ways. 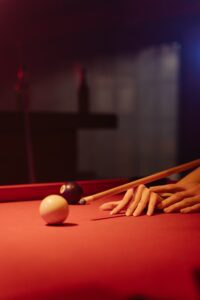 It comes down to aiming at the cue ball in different spots other than the straight center shot. You can hit the cue ball on the left side, LEFT English, or on the right side, RIGHT English. You can also apply the stop (center ball hit), draw (below center hit) or follow (above center hit) with English. English applied with draw is normally called low English while English applied with follow is called high English.

With either left and right English or Sidespin shots will cause the ball to spin to either side.

This is commonly referred to as inside or outside English. This technique is used primarily to alter the natural roll of the cue ball, thus causing it to curve to the desired side. This can be of use if you have a ball interfering with a straight on shot, or if you are looking to deflect the cue ball in a different direction.

One thing that makes english difficult is that it is hard to estimate the amount of deflection that you will get on the cue ball. Only with enough experience will you be able to make a good estimate. Players should concentrate on the centered shot and have it mastered before attempting to integrate English shots into their repertoire. Like all shots and techniques, you will need time and patience to develop your style and become successful at completing these shots.

Learn how to use backspin >